The Therapeutics Research Institute, a 501(c)(3) nonprofit corporation, was initiated to examine and report on various aspects of modern therapeutics. Its website, TRI-institute.org, which contains its reports and commentaries, became operational in August 2014.

Progress on the three initial projects of the TRI-institute and planned work are summarized in the chart below (click for a larger chart). 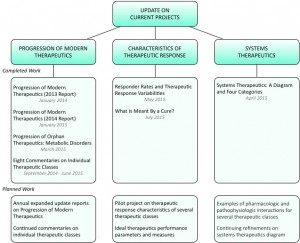 This project focuses on the development of a database involving therapeutic response characteristics of approved new drugs, including therapeutic response variability and range, from minimum and average to maximum responses. An initial project outline has been proposed, and a commentary has been posted on the ultimate positive response, i.e., cure.

Planned work includes 1) developing a pilot project on therapeutic response characteristics of several therapeutic classes, selected from those completed under the project on “Progression of Modern Therapeutics”, and 2) proposing a summary of the ideal therapeutics performance parameters and measures.

This project focuses on the interactions of pharmacologic and pathophysiologic processes resulting in a therapeutic effect. An initial diagrammatic framework has been proposed, which includes four systems therapeutics categories, ranging from the molecular level, through the cellular and tissue/organ level, to the clinical level.

Planned work includes 1) developing several examples of individual pharmacologic and pathophysiologic interactions, involving each of the systems therapeutics categories, for several therapeutic and pharmacologic classes, and 2) making any refinements or additions to the initial diagrammatic framework, in part based on learnings from the examples developed.

In 1980, Dr. Paul P. Beeson published a paper in the journal Medicine (1), where he reviewed and compared treatments recommended in the first (1927) and fourteenth (1975) editions of the Cecil Textbook of Medicine (2). In 1927, only 6% of diseases had treatments considered to be “effective”, “helpful”, or “highly effective”, whereas in 1975, half a century later, this percentage had increased to 50%.

It is noted that the project on “Progression of Modern Therapeutics” starts approximately around the time Dr. Beeson’s assessment ends. It is also noted that in the time period between 1976 and 2014, a total of approximately 1,000 new drugs have been approved by FDA, i.e., meeting regulatory requirements for approval, and importantly, these include the majority of today’s effective treatments. These considerations emphasize the importance of continuing examination of various aspects related to the evolution of modern therapeutics, and what can be learnt from those. These are the fundamental objectives of the Therapeutics Research Institute, that led to its initial three projects.

Refer to other section on this website, particularly Projects, Reports, and Posts.