A systems therapeutics framework, “Systems Therapeutics: A Diagram and Four Categories”, was recently presented on this website, tri-institute.org (2015), illustrating pharmacologic processes and pathophysiologic processes separately. This framework incorporated four different levels of interactions between these two fundamental processes, ranging from the molecular level, through the cellular and tissue/organ levels, to the clinical level; these four different levels of interactions are referred to as systems therapeutics categories. This conceptual framework builds on previous work by others, principally Grahame-Smith & Aronson (1992) and Post et al. (2005), and significantly expands previous work by Bjornsson (1996). The purpose of this initial work on systems therapeutics was to present a theoretical framework, which could be useful when examining different types of therapeutic effects; definitions and a few examples were presented for each systems therapeutics category.

Since issues of such variabilities were not addresses in the previous paper, and considering their importance, the purpose of the present paper is to highlight key areas in systems therapeutics variabilities. Below is a graph of the systems therapeutics framework, illustrating the pharmacologic processes and pathophysiologic processes separately (click for a larger graph). 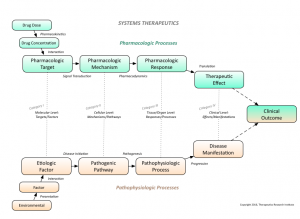 For the past three to four decades it has been assumed that interpatient variability in therapeutic effect is determined by individual differences in pharmacokinetics, pharmacodynamics and compliance. Note that the net effect of pharmacokinetics and compliance, the drug and its concentration at the site of action, as illustrated in the top left hand corner of the graph, can be considered as the initial determinant or driver of pharmacologic processes.

Variability is pharmacokinetics (PK), which covers drug absorption, distribution, drug metabolism and drug elimination, has been amply demonstrated. Tables of pharmacokinetic parameters of approved drugs are widely available and accessible, e.g., in textbooks and reviews of individual drugs or pharmacologic classes. A comprehensive table of pharmacokinetic parameters of approved drugs is included as an appendix by Thummel et al. (2011) in Goodman and Gilman’s The Pharmacologic Basis of Therapeutics. This table lists for each drug its bioavailability, urinary excretion, plasma protein binding, clearance, volume of distribution, elimination half-life, peak time and peak concentration, typically expressed as mean ± standard deviation, but sometimes as mean and range in values. A coefficient of variation (CV) for clearance, one estimate of interpatient variation, of approx. 30% is common, but these can range considerably; obviously, the range in values can be significantly larger. A recent paper by Gao et al. (2011) on over 15 targeted anticancer drugs illustrates their wide pharmacokinetic variability, showing CV for exposure varying between approx. 25-82%, and trough levels varying between approx. 6-26 fold.

While detailed descriptions of etiology, pathogenesis, pathophysiology, pathology, prognosis, and clinical manifestations and treatment of diseases are provided in textbooks of pathology and medicine, there is limited discussion of quantitative patient variability in disease progression over time. Ideally, such information would come from longitudinal studies on the natural history of diseases, but unfortunately, these are not available for most diseases, although clinically, such variability has been well recognized for centuries.

Disease pathophysiologic processes can be visualized as starting with disease initiation (refer to the bottom left hand corner of the graph). Recent work using advanced bioinformatics and network-based approaches has started to elucidate some of the components of disease initiation and their interactions. Although such work has not been directly aimed at variability, because of its promise in the future, two examples are included. First, Liu et al. (2009) introduced the term “etiome” to describe the combination of genetic and non-genetic etiologic factors associated with diseases; this publication identified 863 diseases as having both etiologic genetic and environmental factors (the latter referring to non-genetic factors in the broadest sense). Second, work by Barabasi et al. (2011) and others on so-called network medicine has sought to explore systematically the molecular connections and complexity of individual diseases and the molecular relationships among different (patho)phenotypes. The exciting promise of such approaches includes how these network constructs may connect with pathophysiologic processes or disease progression – systems pathobiology and clinical phenotypes – and thus contribute to determinants or drivers of individual patient’s disease progression; see opinion paper by Loscalzo & Barabasi (2011).

As was mentioned above, there are only limited examples of the natural history of diseases or disease progression. However, data on disease progression over relatively short periods of time, involving repeated measures of disease status, are available and have been collected as part of clinical trials of drug efficacy, as part of control or placebo groups, and as analyzed by disease progress models using pharmacostatistical techniques. Note some assumptions may need to be made regarding the use of placebo groups as representative of natural history of disease. Several different disease progress models have been described, depending on the nature of the disease in question, including symptomatic and disease-modifying effects, and continuous or discontinuous progression, see for example Holford et al. (2012). Such pharmacometrics models have been developed for several diseases, e.g., Alzheimer’s disease, Parkinson’s disease, type-2 diabetes, depression, schizophrenia, chronic obstructive pulmonary disease, and osteoporosis; see summaries by Holford (2013). One example of disease progression involves assessment of cognitive deterioration in Alzheimer’s disease by Ito et al. (2011), based on ADIS-cog measurements, which showed significant variability, with age, gender, APOEe4 genotype and baseline status determining the decline in cognition. Studies on Parkinson’s disease have shown marked variability among patients on the rate of progression, assessed with global functional score, see Holford & Nutt (2008), suggesting there are distinct disease subtypes with different rates of progression.

Considering the significant interpatient variability in therapeutic response to approved drugs, including responder rate and response range, it is important to understand what processes contribute to such variability and their approximate contributions. This paper looked at three key areas, i.e., pharmacokinetic and pharmacodynamic variabilities in pharmacologic processes and disease progression in pathophysiologic processes; in addition, there was a brief introduction to bioinformatics efforts on disease initiation. Key comments are as follows: