Osteoporosis is characterized by a decrease in bone mass and density, resulting in a predisposition to fractures, typically in vertebrae, hips, or wrists. It is particularly common in postmenopausal women, and its prevalence increases with age, hence the two key forms of the disease, i.e., postmenopausal (also called Type I) and age-related (also called Type II or senile) osteoporosis. Drugs for osteoporosis are aimed at preventing fractures due to reduced bone mass.

While the adult skeleton may appear static, an estimated 10% of the skeleton is replaced annually through a tightly regulated remodeling process, representing a balance between net bone formation and resorption, and modulated by numerous systemic factors (1). Peak bone mass is achieved during young adulthood, but once reached, there is a gradual age-related bone loss, which may average about 0.7% per year. In postmenopausal women, there is an accelerated phase of bone loss superimposed on this pattern. Radiographically, bone loss of more than 2.5 standard deviations below mean peak bone mineral density (BMD) in young adults is considered osteoporosis, whereas bone loss of 1 to 2.5 standard deviations below that mean is considered osteopenia. Since osteoporosis cannot be reliably detected in plain radiographs until 30% to 40% of the bone mass is lost, it is difficult to screen for osteoporosis in asymptomatic individuals. Best diagnostic tests of bone mineral density involve specialized radiographic imaging techniques, such as dual-energy x-ray absorptiometry or bone densitometry, also called DXA or DEXA, which measures an individual’s spine, hip or total body bone density to help gauge fracture risk, and quantitative computed tomography.

Since 1984, a total of 9 new drug molecules have been approved for osteoporosis, in 5 pharmacologic classes. Before that time, drugs for this therapeutic class had mainly involved estrogens, with or without progestins, and calcium and vitamin D. The 1995 approval of Fosamax (alendronate), the first of 4 approved biphosphonates, represented an important milestone for this therapeutic class; this pharmacologic class has since remained the dominant class. The other 4 pharmacologic classes involve the SERM’s (Selective Estrogen Receptor Modulators), calcitonins, parathyroid analogs, and the RANK ligands (Receptor Activator of Nuclear factor Kappa-B Ligand).

For new drug molecule approvals for osteoporosis, refer to the accompanying chart below (click here for a larger graph). In keeping with our convention, new formulations of previously approved drugs are not included. 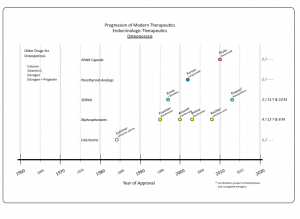 The new drug molecule approvals are listed below:

Osteoporosis is an important public health issue, with its clinical consequences being fractures; signs and symptoms of hip fractures include pain, reduced mobility and disability, whereas those of vertebral fractures include back pain, loss of height and deformity. The treatment benefits of agents directed against osteoporosis thus involve assessments of the reduction in fractures compared with placebo, in addition to biomarker and radiographic measurements. In general, these effects have been considered relatively modest. Of note is that drugs within a given pharmacologic class have their separate benefit-risk considerations, including adverse effect profiles. A few general comments on the current status of modern osteoporosis therapeutics are as follows:

Refer to page 25 of Progression of Modern Therapeutics (2015 Report) available under Reports on this website; this report also includes the methodology used.