Drug development is associated with a significant degree of attrition, which is generally thought to be in the 90 percent range, indicating that only about 10 percent of compounds entering development make it to regulatory submission, approval and market. During the past two decades numerous papers were published on pharmaceutical attrition, attempting to arrive at an overall estimate of attrition, and the key reasons for attrition (e.g., Kola and Landis, 2004; Hay et al., 2014). Attrition rates have been reported to vary significantly depending on different attributes, such as therapeutic areas, phase of development and pharmacologic targets, and commonly cited causes of compound termination have included clinical safety, lack of efficacy, formulation, PK/bioavailability, commercial, toxicology, and cost of goods.

A general comment concerning the published literature on attrition and its causes, as well as assessments within individual pharmaceutical companies, is that definitions and attributions have not been standardized, and common methodology has been lacking. It is also noted that even within individual companies, when reviewing their compound termination databases, it’s not always clear what was considered the primary reason for the termination of a specific compound by the project team.

Considering the significant negative implications of candidate compound attrition for the pharmaceutical industry, principally in terms of R&D expenditure, opportunity cost and productivity, the question arises how the industry might be able to reduce attrition, and thus be able to bring more new therapies to market. As an example, R&D organizations might base how many candidate compounds to bring into development each year on the desired number of drug candidates to be submitted for regulatory submission at a future date following clinical development. Thus, assuming a goal of one regulatory submission per year, at least ten candidate compounds would need to be brought into development each year. Such an inefficient drug development process obviously makes it much harder to address the many unmet medical needs areas.

The purpose of this commentary is to present a framework to address attrition from a different perspective. It is not intended in any way to provide an extensive literature review of this complex topic; references are representative.

From Attrition to Predictivity

While different high-level categories have been proposed as reasons for attrition, such as scientific reasons, technical reasons, commercial reasons and regulatory reasons, each with their specific underlying causes, fundamentally the key causes of terminations are scientific, i.e., based on lack of efficacy, safety issues, and undesirable compound properties (compound properties are defined as determinants and descriptors of exposure). These are also the causes of terminations that together are by far the most common, and that lend themselves to addressing attrition by better understanding of the underlying scientific causes. This involves focusing on predictivity, i.e., how predictive are the preclinical methods and models of clinical performance, as expressed below:

Where PT stands for total predictivity with respect to scientific causes of terminations, and pe, ps and pc stand for the individual predictivities of efficacy, safety and compound properties, respectively. This is shown graphically below, and in an enlarged format here. 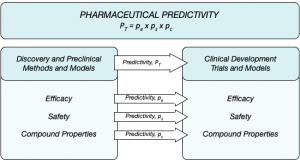 Note that the predictivities of these three scientific components are considered to be multiplicative, which assumes these are independent of each other. Also note that this leaves aside terminations by attrition categories such as cost of goods, formulation issues, budget/resource constraints, portfolio rationalization, potential values, patent issues and regulatory hurdles, as these are fundamentally unrelated to the three scientific causes mentioned above, and are typically business-related rather than scientific.

As was mentioned above, the data and methodologies that have been used to address attrition and attrition categories, as reflected in the published literature, have generally not been uniform or standardized. Yet in order to identify opportunities to reduce attrition, we need well-defined studies with robust statistical analyses of how predictive current preclinical studies of efficacy, safety and compound properties are with respect to clinical performance. With an overall success rate of only about 10%, for small molecules at least, one has to conclude that our understanding of how to confidently progress candidate compounds from preclinical to clinical is limited. Indeed, to quote Sir Peter Medawar, Nobel Laureate in Physiology and Medicine 1960: “No branch of science can be called truly mature until it has developed some form of predictive capability.”

Compound Properties. A number of papers have been published on the predictivity of compound properties based on preclinical data and using a variety of computational models to predict PK parameters in humans and compared these with the observed parameters in man, typically from early Phase I studies (e.g., PISC/PhRMA group, 2011; Jones et al., 2013). The parameters addressed have included PK parameters such as total clearance, AUC, maximum concentration, elimination half-life, bioavailability and food effect. The computational methods have included allometry, in vitro-in vivo extrapolation (IVIVE) and physiologically-based pharmacokinetics (PBPK). The published reports have included data from individual companies and from multi-company precompetitive collaborative efforts. In general, the predictivity for the individual compound properties parameters have broadly ranged from about 0.4 to 0.7 (predictions within a factor of two), although there has been considerable variability from report to report; PBPK appears to be the favored method.

Safety. There have also been numerous published studies addressing predictivity of safety, typically based on the concordance of adverse effects in man (after Phase I or after clinical development) with the findings from preclinical safety studies (e.g., Olson et al., 2000; Monticello et al., 2017). In general, these studies have found good concordance between the findings in preclinical and clinical studies, although there has typically been considerable variability with respect to different organ systems. While methodologies based on concordance are not specifically addressing predictivities, these are generally thought to be of a similar magnitude as those for compound properties, in the broad range of 0.4 to 0.7. It is noteworthy that regulatory requirements for preclinical studies for safety and compound properties are well standardized and prescriptive, including ICH guidelines.

These considerations suggest that in order to meaningfully reduce attrition rate, much more work is needed to better define the predictivities of preclinical methods and models, particularly those with respect to efficacy. Work in this general area to date has clearly shown the value of precompetitive collaboration across the industry, as exemplified by recent work on compound properties (e.g., PISC/PhRMA group) and on safety (e.g., DruSafe group). It is important to note however that such collaborative work is both resource and time intensive and requires long-term commitment by the participants. Yet, it is hard to imagine how pharmaceutical productivity can be improved without it.

PISC/PhRMA group. J. Pharmaceut. Sci, 100(10): 4045-4157, 2011. This issue has five papers from a PhRMA working group on predicting human pharmacokinetics, plus an editorial and a commentary by its two consultants.